Garments and the planet (1 contributions) 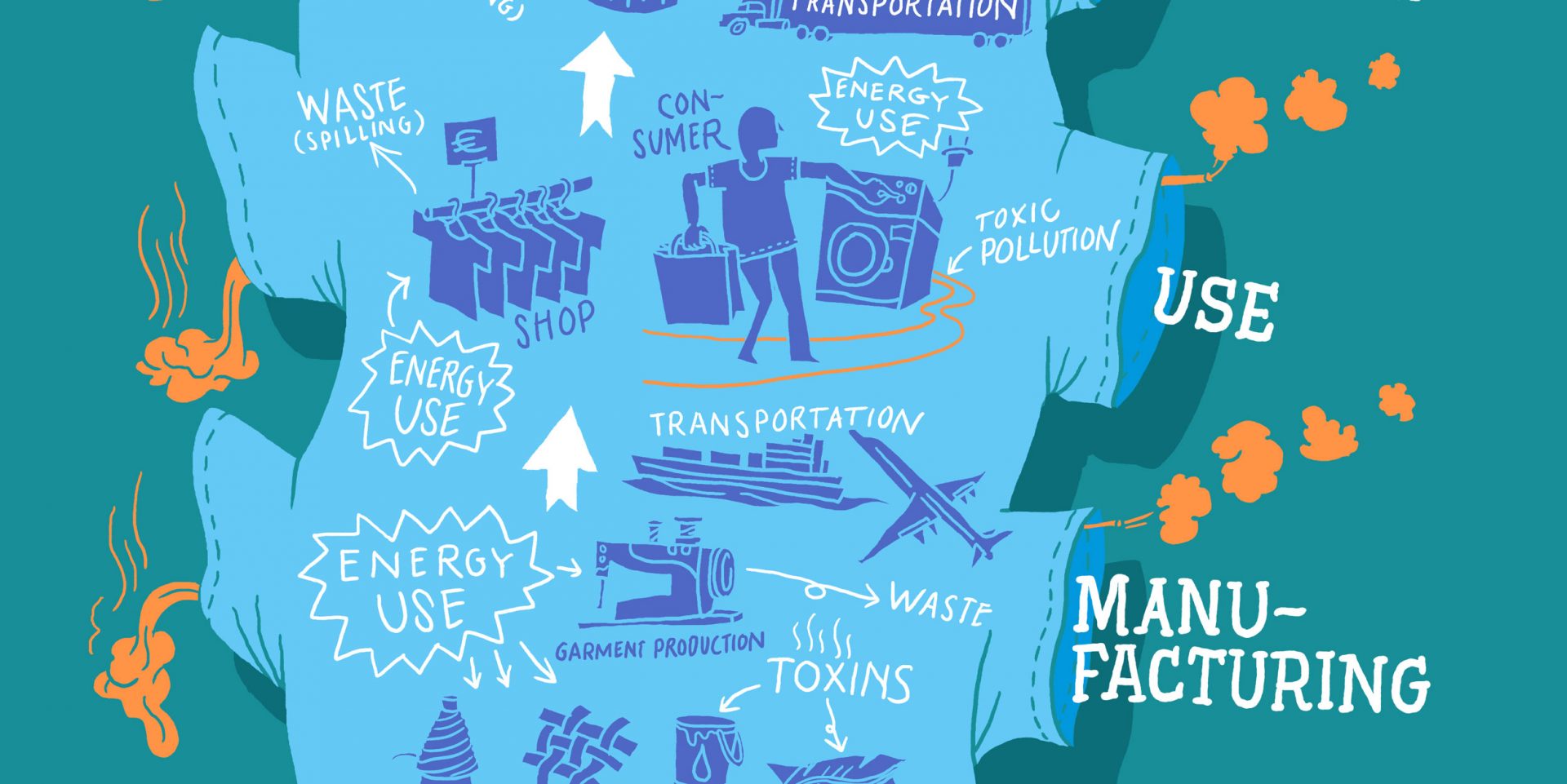 Nearly every stage in a garment supply chain is characterised by environmental degradation, excessive use of resources, greenhouse gas emissions and pollution. The implications are global and include knock-on effects like climate-linked migration flow. Yet workers’ rights advocates fail to recognise that environmental issues are also very much the domain of workers rights. These issues have a disproportionately negative impact on the living environment and workplaces of garment workers and their communities.

An industry approach that the planet cannot sustain

When we consider the lifespan of the vast majority of the clothes we wear, from farm to the recycling bin, the wastefulness is simply staggering. We see pollution and overuse of soil, rivers, lakes, wetlands, and underground aquifers.  We see the release of toxins and other pollution in the production of raw materials (think fertilisers, pesticides, and toxic waste). We then see other pollutants released at other stages of a supply chain — including tanning, milling, weaving and dyeing (think waterways that are discoloured and/or poisoned, and, again, toxic waste).

There is waste and disposal at every stage of production, most notably amongst retailers and consumers who regularly dispose of products after very little (or even no) wear.  We are beginning to see the scarcity of raw materials and other inputs that naturally flows out of a such a wasteful system.

This is all before we consider the CO2 and other greenhouse emissions that each garment represents.  For example, according to one MIT report, a single cotton t-shirt creates an estimated 4.3 kg of CO2, which when aggregated for all cotton t-shirts produced annually is equivalent to the emissions of 25 coal-powered plants burning for a year.  The numbers are even higher for synthetics.

Significant environmental changes are already underway. How can workers weather the storm?

We already see that environmental change is underway. If nothing changes, the industry is running headlong into shortages, competition, and collapse. Workers will experience irreparable damage to the natural resources that their communities depend on. As worker advocates this can be nothing less than alarming.

"We already see that environmental change is underway... As worker advocates, this can be nothing less than alarming." 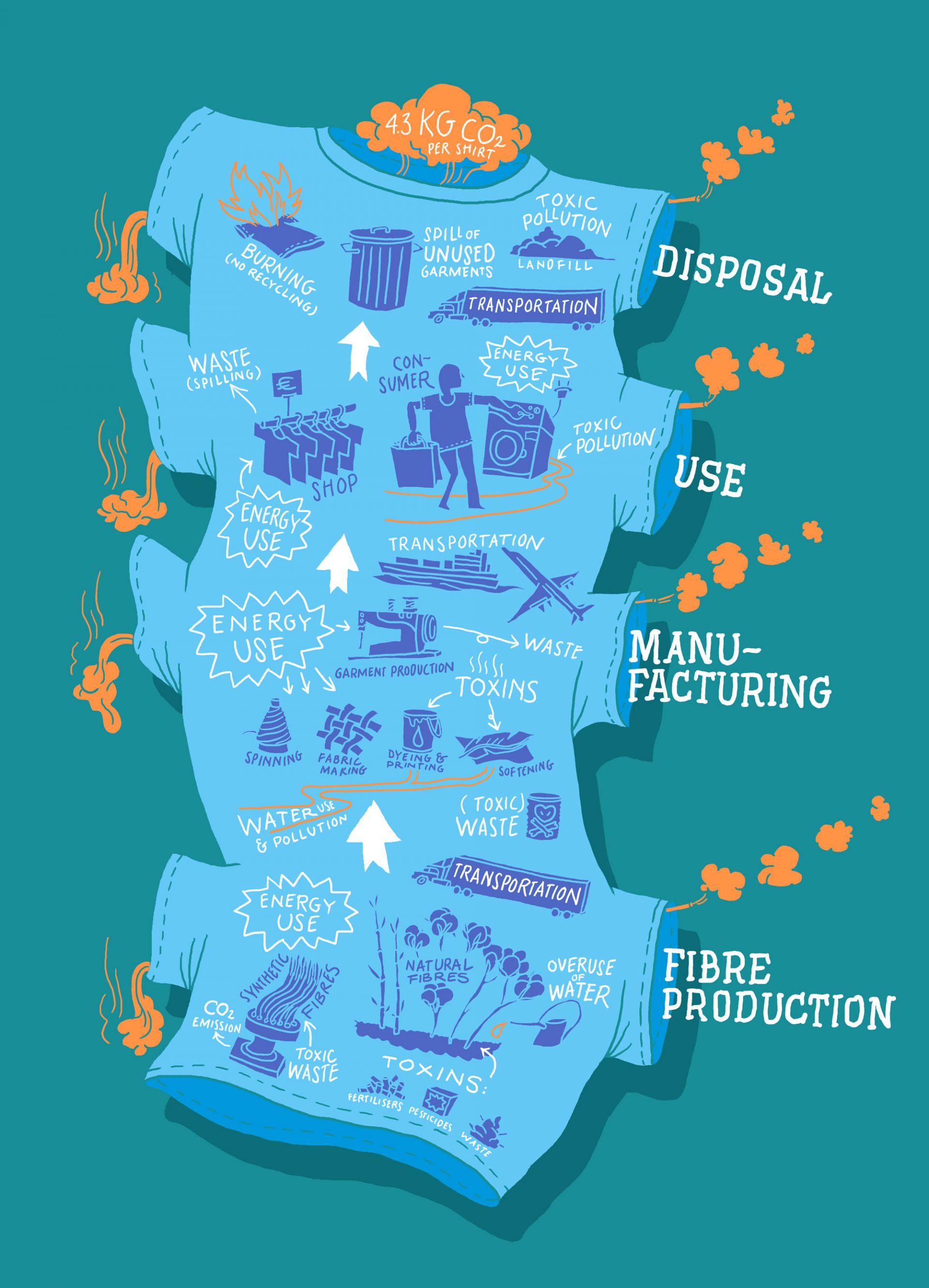 So what significant shifts need to be undertaken – today rather than tomorrow?  It is critical that we understand how possible actions, and inaction, will affect workers currently reliant on the garment industry for their livelihoods. What steps can we take now to help workers weather the changes that lie ahead for the entire industry?

We foresee that many of the answers to such questions will link to all of the other threads of this project. Circularity and reuse, in particular, are critical to a more sustainable fashion industry. Here, innovation and technology will surely need to play a central role – in terms of shifts in production processes, raw materials used, and questions relating to data (embedded or otherwise) to track the lifespan of a product.

And, of course, there are critical links to consumption practices and related policies. How do we effectively escape the dominant fashion culture of disposability and disconnection from nature? And what innovations, virtual or otherwise, can enable us to satisfy the human inclination to express ourselves through what we wear (or are seen to wear)?

Worker advocates: Ignore the environment at your peril

Answers to such questions must feed into strategies that seek to support garment workers as we look towards the future.  Worker-focused solutions will ignore the environment – and efforts to reform industry practices to align with planet realities – at their peril.

Garments and the planet (1 contributions)